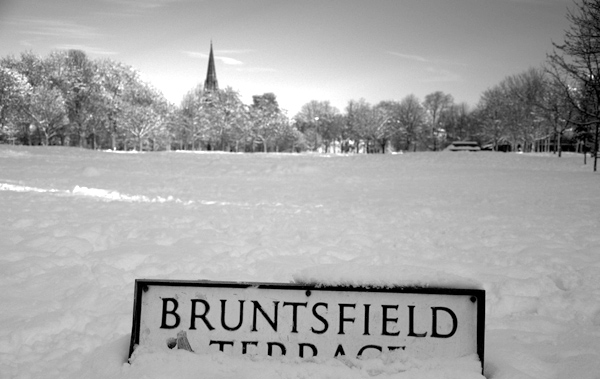 British weather is never the most predictable at the best of times, but winter in particular can present some unexpected weather issues. The constant threat of snow and ice causing chaos to your morning commute means that you’re likely hanging on the weatherman’s every word. But what exactly do all of those winter weather words mean?

Take a look at our glossary to make sure that you know the difference between a snow flurry and a snow squall.

A thin layer of new ice which forms on fresh water or dew-covered surfaces.

It is common on roads in the early winter and is given the term ‘black’ because it is transparent. Black ice is notoriously difficult to see, so you should always pay close attention to black ice warnings.

A winter storm with sustained winds or frequent gusts of 35mph or more.

It causes major blowing and drifting of snow, reducing visibility to less than a quarter of a mile for 3 or more hours, making driving conditions dangerous. Blizzard conditions are also associated with extremely cold temperatures, so you don’t want to get caught out in a blizzard.

Wind-driven snow that is lifted from the surface by the wind to a height of at least 8ft, greatly reducing visibility.

Blowing snow may be snow that is falling or snow that has already accumulated on the ground which is picked up by strong winds wind. The snow deposited by the winds may create snowdrifts. The poor visibility makes it unwise to travel in blowing snow.

Drifting snow is similar to blowing snow, but the snow is not lifted higher than 8ft. The snow deposited by the winds may create snowdrifts. Visibility is not greatly affected with drifting snow.

A major warming of the surface water of the eastern and central Pacific Ocean. A weakening of the trade winds which usually push this warm surface water towards the west allows the warm water to pool as far eastward as the western coast of South America.

El Niño events usually occur every 3 to 7 years, and are related to unusual shifts in global weather patterns. El Niño is Spanish for “the Child” (i.e. Christ) because it often begins around Christmas.

A brief snow shower which suddenly stops and starts and may also rapidly change in intensity.

A flurry does not tend to result in much snow accumulation.

Drizzle or rain that falls in liquid form and then freezes upon impact with the ground or a surface with a temperature of 0°C or lower, usually resulting in a thin coating of ice.

Even in small amounts, freezing drizzle may cause travelling problems, as the road surfaces can be very slippery.

A suspension of tiny ice crystals in the air, or water droplets at temperatures below 0°C, causing surface fog.

Freezing fog reduces horizontal visibility and, as such, can create dangerous driving conditions.

Precipitation (something falling from the sky) in the form of balls or irregular lumps of ice.

Hail is produced by liquid precipitation freezing in sub-zero temperatures and being coated by layers of ice as it is lifted and cooled in strong updrafts of thunderstorms.

Hailstorms are usually not prolonged, but they can sometimes be intense, with lightning, strong winds and large hailstones, which may make driving difficult.

Sleet is usually used to refer to a mixture of rain and snow, or falling snow that is melting into rain.

It forms when precipitation is cooled at sub-zero temperatures and turns to snow, but then enters a warm layer of air above the surface and melts. Sleet can also refer to raindrops that freeze into ice pellets before reaching the ground, entering a layer of sub-zero air near the surface and refreezing.

A very intense shower of snow, often of short duration, that greatly restricts visibility and produces periods of rapid snow accumulation. While usually brief, driving conditions during a snowburst can be dangerous due to the restricted visibility.

Light snow showers, usually of an intermittent nature and short duration with no measurable accumulation.

Visibility is not usually an issue in snow flurries and they do not last very long.