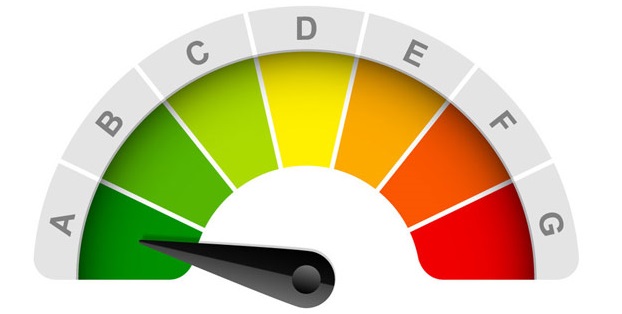 Heating your home makes up around 55% of your total energy bills, so it is important to consider the benefits of an energy efficient boiler and its impact on both your bank balance and the environment.

This guide will explain boiler efficiency and the benefits of replacing your current boiler with a newer, more efficient model.

How are boiler efficiency ratings calculated?

Boiler efficiency is rated using the SEDBUK system, which stands for Seasonal Efficiency of Domestic Boilers in the UK, and compares how efficient a boiler is at converting fuel into heat.

This rating was traditionally shown as a letter from A-G, but this has since been changed to a percentage value to avoid confusion with the European energy labels, which use similar letter ratings but use different principles for their calculation. You may, however, still see this lettering system on older boilers.

The two types of rating are:

The old and new ratings roughly match up as follows: 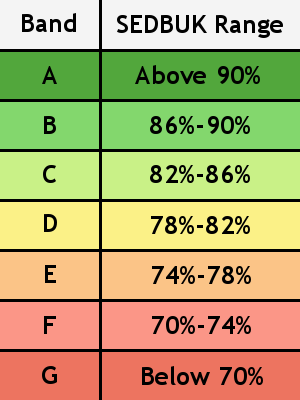 How much money could I save by replacing my boiler?

The Energy Savings Trust (EST) quotes that replacing a G-rated boiler with an A-rated boiler and a full set of heating controls could save you around £340 per year. While this does not take into account the cost of having the boiler replaced, it is a substantial saving which you will benefit from year after year.

The EST has provided the below savings for homes in England, Scotland and Wales when upgrading an old gas boiler without controls, with a new A-rated condensing boiler with a programmer, room thermostat and thermostatic radiator controls: 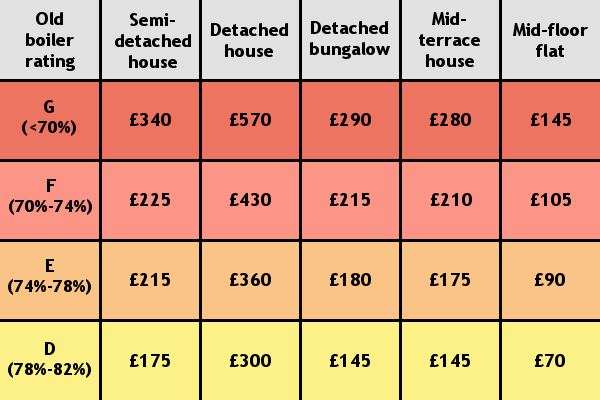 My boiler still works fine. Why should I get it replaced?

Building regulations specify that if you are replacing a boiler then you must do so with an A-rated model, which will put it at at least 88% energy efficiency, with most models now performing at 90% and over. If your boiler is an older model then the change to an A-grade boiler will equate to a high percentage increase in efficiency.

Because nobody wants to be without hot water, it is worth scheduling your boiler replacement rather than waiting for it to break down. Not only would replacing it earlier mean that you do not run the risk of being without water for a lengthy period of time or having to pay for an emergency call-out, but it will also mean that you start seeing savings quicker.

Benefits of getting a new boiler fitted

Even if your current boiler is still functioning, there are a number of reasons why a having a brand-new model may be beneficial.

Better for the environment

New boiler models are more efficient and therefore better for the environment. They use less energy to heat the water, meaning less usage of natural resources such as gas and oil, and fewer CO2 emissions.

The EST’s estimates of replacing a G-rated boiler with an A-rated boiler and a full set of heating controls equate to a reduction of carbon dioxide of 1,500kg per year. When spread across all of the homes in the UK, this will make a huge difference to the environment.

As previously mentioned, a more efficient boiler means lower costs, as it does not use as much energy to heat the water. When upgrading from an older boiler, you can save hundreds of pounds over a year, with the savings usually outweighing the initial costs of having the boiler replaced in just a few years.

Newer boilers are, generally speaking, smaller than their older counterparts. With the increased focus on energy efficiency, many people are opting for combi boilers, rather than a regular boiler with a separate hot water cylinder. This means that they take up much less space, which could be used for other things. If you are looking to convert your loft into another bedroom, for example, removing the boiler tank will significantly increase your usable space.

New boiler models tend to provide greater reliability than older models, and it is worth noting that should you need any repairs, spare parts will be easier to get hold of for a newer model.

Modern boilers are generally quieter than their older counterparts and heat water faster due to their improved efficiency, saving you both time and money.

The advanced features of brand-new boilers also make them very easy to use, with a variety of settings and timers set by simple dials. This lets you control the temperature in your home, having your heating turn on and off when desired without needing to be there.

This allows you to have your heating come on just an hour or so before you get home, for example, so you don’t come home to a cold house or waste money and energy by leaving the heating on all day.

Modern boilers are also capable of working with smart thermostats, which are a recent development allowing your heating to be controlled using a smartphone, even when you’re not at home. This allows for great usability, as well as money saving opportunities, such as switching off your heating remotely if you’ve accidentally left it on.

VHL are here to help!

VHL offer a full range of expert boiler services, including replacement boilers, repairs and servicing. If you’re interested in upgrading your boiler to a more energy efficient model, get in touch with the team today to discuss your options and find out the best boiler for your requirements.